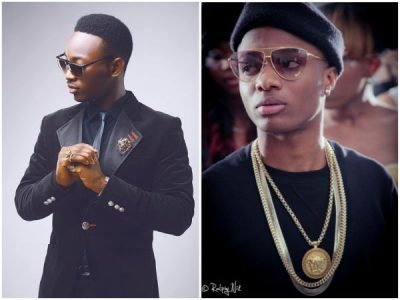 Popular singer, Dammy Krane, in a chat with Punch revealed how and why he forgave Wizkid for reportedly stealing his song, some few years ago.

Recall that in the early stage of Dammy Krane and Wizkid’s career, they were close pals, but that ended in 2016 after the pair reportedly fought brutally in the popular Lagos club, Quilox. It was reported that the fight ensued because Dammy Krane alleged that Wizkid stole the song,’Baba Nla’, from him after paying him a visit at home. Since then, both singers have not been seen in public together until this year when they were spotted  together.

In a chat with newsmen, Dammy Krane disclosed how and why he reconciled with his old buddy.

“Wizkid and I went to an event and from there we went out together. It was from there that we became friends again. I have forgiven him because it is just one song and we would still do songs together. We would still do one or two things together but you need to understand that we are all getting to different stages of our lives.”

When the artiste claimed that Wizkid stole his song, some social media users opined that the song could not have been as much of a success if Dammy Krane had sung it. For the first time, he has reacted to the insinuations saying, “I believe that my songs would last for a long time; they are all evergreen songs and ten years from now, I know that you would always hear Dammy Krane’s songs like Amin and Amen.”

The artiste, who also had a misunderstanding with fellow music artiste, Orezi, because the latter replicated his hairstyle, explained what happened between them. He told Saturday Beat that Orezi had apologised to him.

The artiste also used the opportunity to talk about his new project, ‘Amen.’

“When it comes to releasing an album, it is based on the demands of my fans. I always get messages on my Instagram about when I would release an album but when the demands becomes too many, I would forward them to my management and we would set a date for the album,” he said.

“I have a great relationship with Tuface and I have a learnt a lot from him. He is more like a mentor to me in the industry; I have learnt a lot about humility and hard work from him and he is also a God-fearing person. He taught me how to be a businessman as well.”