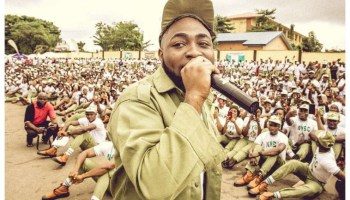 Nigerian superstar, Davido, was dragged by a Twitter user on the platform over his nonchalant attitude towards the NYSC compulsory program.

The troll tweeted that he was waiting to see how NYSC would give the music star his discharge certificate, a move he said he will be taking up.

However Davido who replied, called the man for worrying about another man’s life.

Read the exchange below;

This comes just few days after it was revealed according to NYSC Bye Laws which strongly advised her members not to take part in any political campaigns whatsoever that Davido might be penalized with an extension of 3 months in his service, and may not get paid.

One of The Bye-Laws states that: “Any member who takes part in partisan politics is liable to extension of service for a period not less than three (3) months without pay.”