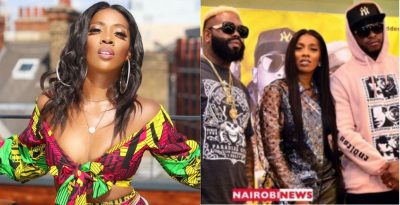 Nigerian music star, Tiwa Savage who gave a thrilling performance on Saturday at the Carnivore Grounds for Redsan baddest album launch, has called out Kenyan promoters.

According to Tiwa Savage, the Kenyan promoters didn’t pay for full accommodation at the hotel she was checked into and didn’t make any provision for a car to take her to the airport.

She took to twitter to rant on the inadequacy of the promoters and went on to say the work goes on because she does it for the fans.

“Checking out of the hotel and full accommodation not paid for, no car to take us to the airport and promoters want to talk trash about artists

“I love KENYA always have and always will”

The concert Tiwa Savage headlined, had a special performance by leading Kenyan hip hop heavyweight, Khaligraph Jones and top DJs Wesley and Kriss Darlin. Speaking on Friday ahead of the concert, Demarco (real name Collins Edwards) commended Redsan for his stride and encouraged fans to turn out in large numbers and show their love for their compatriot.

“Redsan and I have been friends in music for a long time and I am glad to be back to support his album launch. I am looking forward to the show tomorrow and call out all our fans to come out and support Kenya’s son,” he said.

Tiwa on the other hand, said she was excited to be back in Nairobi to support Redsan.

“He is one of the most consistent artistes I know and I really admire his style and distinct sound. I look forward to working with him as we take African music to the world,” she said.