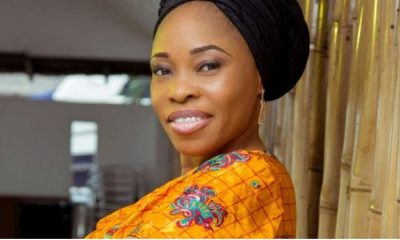 In an interview with Saturday Beats, famous gospel singer, Tope Alabi declared that many celebrities live fake lives but despite the fame she enjoys, she has made a conscious effort not to live like them. She also talked about boarding public transport despite her fame, and her failures in music and how she eventually triumphed

She said, “I still go to the market to buy groceries; I don’t like the idea of living the life of a celebrity. Sometimes when I want to go out, I take public transport. There was a day I boarded the BRT bus in Lagos to get to the popular Balogun market; I could hear the passengers whispering to one another.

“They were arguing if I was the one or not. They were saying Tope Alabi is not a poor person so there is no way she will be on a public bus. When I was about to alight from the bus, I revealed my identity to the driver, and this made many of the passengers to also get down from the bus to take pictures with me.

“Sometimes, it is necessary to have a taste of what it feels like to be an ordinary woman on the street. Many celebrities do not live their real life and are not free to do whatever they like; that is why I don’t restrict myself. When someone is not free to do what they feel like doing, like every other person on the street, it causes depression which can even lead to death.

“Some people try to sell fabric worth N20,000 to me at the rate of N100,000 because I am a celebrity; they don’t bother to find out if I have that kind of money or not. Living a fake life can lead to indebtedness as some celebrities always want to meet up to a certain standard,” she said.

Alabi explained how she enjoys going on long walks in her neighbourhood, describing it as “the kind of life I like.”

“Someone once told me to get escorts for security reasons, but I declined because I didn’t need them and still don’t need them. I am still discrete about my movement but I still live a normal life.

“I believe in buying only the things I can afford; I’m not materialistic. I always hear different stories of celebrities that lie about their material possessions; there is no need to live an extravagant life at all,” she added.

Describing how she felt about the acceptance of the viral music, Alabi said she had no idea she would become a successful gospel artiste. Citing her first two albums as an example, the singer recalled how gospel songs were poorly accepted at the start of her music career.

“The Holy Spirit gave me about 16 songs on the spot on the day we recorded, ‘Logan Ti Ode.’ It was not planned, we were supposed to be singing together but the Holy Spirit had other plans for us. It was after the whole thing that TY Bello revealed to me that the Holy Spirit told her to keep quiet while I sang.

“There was none of my old songs on that track; it was supposed to be a photo shoot and a moment of worship. So, when we finished the photo shoot, TY Bello called a keyboardist and a drummer to join us; the plan was just to do a family worship. However, immediately I noticed the presence of the Holy Spirit, I had to suspend what I was doing prior to that time and I followed His leading.

“I am still in awe of how the song went viral within a short time; some of my songs had gone viral like this before but this is exceptional. When I started gospel music, I didn’t expect to be this famous; I am even afraid because the fame and fans are overwhelming. I am afraid because I fear God.

“What if I had been discouraged when my music was not paying my bills? I used to struggle to pay my children’s school fees. I once hired a bus for my band members and had to pay by instalments,” she said.

She recalled how some marketers she had taken copies of her first album to, asked her to come and take them away as no one was buying.

“When I gave the compact discs to some marketers, they asked me to come and take them back because people were not buying them. I was very discouraged; I made up my mind not to sing again. I told God that there was no way I would do music as there were other things I could do that would fetch money for me.

“Four years after, I did another album and people still did not buy it. It wasn’t until I added another song that people started buying the album,” she added.Interestingly when she was young, Alabi’s parents wanted her to become a Sister as according to her, they knew she would work for God.

“When I was about seven years old, my parents told me God was going to use me but I didn’t believe them, they actually thought I was going to be a Sister because I was born into a Catholic family.

“I told them I didn’t want to be a Sister even though I loved Catholicism. They were worried that I didn’t want to go to the convent. My mother always insisted that I would work for God. Interestingly, I got my style of singing from my mother. Sometimes, when I sing, I listen to her voice in me,” she told Saturday Beats.