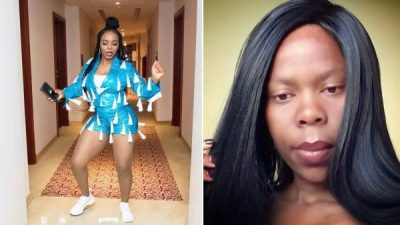 Award winning Nigerian singer, Yemi Alade was dragged into a banter with a troll who called her names and discredited her for acknowledging Davido and his girlfriend, Chioma in a song.

The ‘Tumbum’ singer posted a photo of herself on Instagram bursting a dance move with the caption, “FORGET! I AM A WHOLE F**KING MOOD!!💙”

However reacting to the photo in the comment section, the troll wrote;

Everything not original, plastic fake…u actually ruined that killa song with those disgusting lines ” obo en chefchi” like really?? U lacking some ideas now😒😒 gosh u such a bore or u were trying to please David?

Reacting to the comment, Yemi Alade notified the troll of need for a plastic surgery to fix her nose. She wrote;

YOU NEED A “PLASTIC” SURGEON TO FIX THAT NOSE HUN!