Home / Gist / Super Star, Card B Calls Nicki Minaj A ‘Thot’ That Sleeps With Everybody 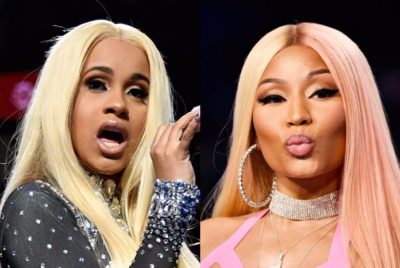 MTO has obtained a screenshot of an alleged Instagram conversation between Cardi Band a fan, where the rapper called her rival Nicki Minaj a ‘Thot’ that sleeps with everybody.

This comes after Migos rapper, Quavo who is in the same rap group with Cardi B’shusband, Offset made claims he slept with Nicki Minaj on new track ‘Huncho Dreams’. Read previous report here.

In the screenshot of the conversation between Cardi B and the fan, the rapper called a b**ch and vowed to outsell her album.

She also mocked Nicki after Quavo claimed in his song that he slept her. Cardi wrote: “That’s why Quavo outed her thot a** out. She be f****** Everybody.”

See the screenshot below.