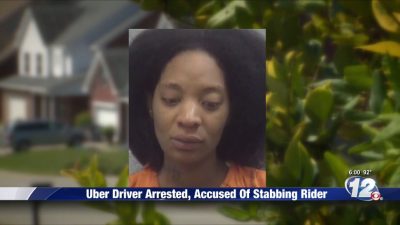 A Georgian Uber driver has been arrested and charged for allegedly stabbing two passengers. According to People, the incident which occurred on Sunday involved a 29-year-old woman Shaunisha Danielle Brown and two passengers whom she allegedly stabbed multiple times after one of them threw up in her car.

One of the passengers who was unharmed Daniel Millard shared with WRDW-TV: “The Uber driver showed up we all get in. Everything is fine and dandy. We are like we’re going home. Great. She went down another wrong road and Amber just said, ‘Just get us where we are going please,’ and the driver got offended by that I’ll take it.”

Milliard further revealed that at this point, Danielle Brown stopped the car and yelled  “What did you say to me?”

The report further revealed that authorities claimed that the passengers were intoxicated and one began to vomit in the car which prompted the driver to get physical. After attempting to kick the riders out of her car, she allegedly pulled out a knife and stabbed the women multiples times.