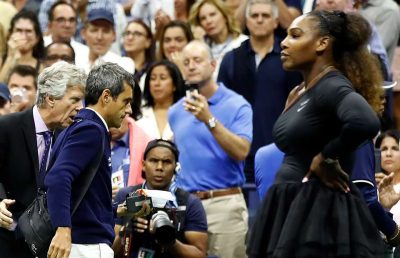 Serena Williams has broken her silence in her first interview since accusing a US Open umpire of sexism, and insisting she did not connive with her coach to cheat.

Williams called umpire Carlos Ramos a “thief” and a “liar” after she was given a warning for receiving coaching from her coach in the second set of the final.

While speaking in an Australian television show, The Sunday Project, Williams insisted that she did not receive help from coach Patrick Mouratoglou during her defeat to Naomi Osaka.

Williams said of her coach Mouratoglou: “He said he made a motion, I don’t understand what he was talking about. We’ve never had signals.”

And why she accused the umpire of sexism, she replied, “I just don’t understand,” she said. “If you’re a female you should be able to do, even half, of what a guy can do.”

However, her coach Mouratoglou admitted he was coaching Williams, but said she didn’t look at him. But he added that Osaka’s coach was also coaching her during the match.

Williams was handed a fine of $17,000 fine for three code violations for receiving coaching,smashing her racket and for verbally abusing the umpire.