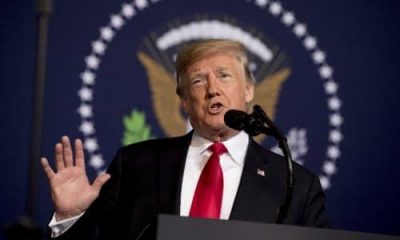 Donald Trump has said he would be proud to shut down the US government over his demands for a wall on the border with Mexico during an extraordinary public row with top congressional Democrats in the Oval Office.

In the meeting, which was scheduled to be closed to the press but was opened to reporters at the last minute, Trump bickered with the US Senate Democratic leader, Chuck Schumer, and the House Democratic leader, Nancy Pelosi, about funding for the wall he has promised to build on the southern border, which has long been his signature policy position.

“If we don’t get what we want, one way or the other – whether it’s through you, through a military, through anything you want to call – I will shut down the government,” Trump said during the heated exchange.

“I am proud to shut down the government for border security, Chuck, because the people of this country don’t want criminals and people that have lots of problems and drugs pouring into our country,” he said before reporters left the room and a brief closed-door meeting began.

Speaking after the meeting, Schumer characterized the display as a Trump “temper tantrum”.

“This temper tantrum that he seems to throw will not get him his wall,” he said, adding that if Trump doesn’t change course, “he will get no wall and he will get a shutdown”.

Much of the US government is still funded via a short-term continuing resolution, which will expire on 21 December. These areas include homeland security, the Department of Justice and the IRS. Without new authorizing legislation by that deadline, a partial government shutdown would be triggered. While Trump’s fellow Republicans control both the House and the Senate until next month, Democratic support is needed to pass any spending legislation.

Trump has asked for $5bn for border security in a package to extend funding for the Department of Homeland Security until 30 September. Schumer and Pelosi were expected to offer just $1.3bn, less than the $1.6bn that had previously been negotiated in a bipartisan compromise in the Senate.

During the on-camera exchange, Pelosi objected to the sparring, saying: “I don’t think we should have a debate in front of the press on this.”

Trump repeatedly interrupted Pelosi and called her “Nancy” as she insisted he did not have the votes in the House to support the building of a wall anyway.

Mike Pence, the vice-president, watched the fireworks from his seat next to Trump, but did not participate or visibly react.

The showdown will be the last government funding before Democrats take control of the House in January. At that point, they will have significantly more leverage in future negotiations over keeping the government open. Trump has not followed through on previous threats to shut down the US government over border wall funding. But with his fellow Republicans set to lose control of the House of Representatives in January following Democrats’ gains in elections this month, Trump’s comments have raised the spectre of a pre-Christmas shutdown.