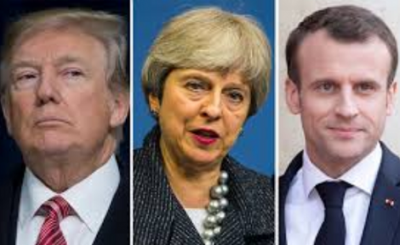 The US, UK and France launched strikes against targets at three sites in Syria in the early hours of Saturday morning, following a week of threats of retaliation for an alleged chemical weapons attack on civilians in the Damascus enclave of Douma.“I ordered the United States armed forces to launch precision strikes on targets associated with the chemical weapon capabilities of Syrian dictator Bashar al-Assad,” Trump said late Friday at the White House.

The strikes were launched at 9 p.m. ET, as most of Europe and the Middle East was shrouded in darkness. Photos showed missiles streaking over the night sky in Syria, and witnesses told CNN they heard explosions in the capital Damascus as Trump was making his address.

The Syrian Armed Forces said in a statement that 110 missiles were fired on Syrian targets and that the country’s defense systems “intercepted most of the missiles, but some hit targets including the Research Center in Barzeh.”

Russia’s news agency TASS reported that none of the missiles fired by the three western nations struck areas near its naval and air bases in Syria. Those bases come under the protection of Russian air defense units.

US defense and military officials told CNN that aircraft, including B-1 bombers, and at least one US Navy warship based in the Red Sea, participated in the strikes.

Gen. Joseph Dunford, chairman of the US Joint Chiefs of Staff, told reporters at a Pentagon briefing that the first allied strike targeted a scientific research center in greater Damascus involved in the development and production of chemical weapons.

“Important infrastructure was destroyed which will result in a setback for the Syrian regime. They will lose years of research and development, storage and equipment,” Dunford said.