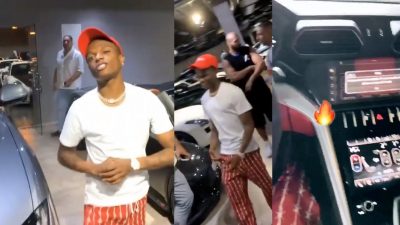 It is no doubt that the year 2018 has been one of absolute bliss for Nigerian music superstar, Ayo Balogun popularly known as Wizkid. From dropping hits to snagging big endorsement deals, it only seems to get better.

Despite the baby mama drama that trailed the Starboy a while ago, it appears he still remains focused on getting that paper. Just recently, the 28-year-old father of three released the official video for his song, Fever which featured Tiwa Savage as a video vixen therefore causing mass hysteria on social media.

Shortly after the release of the video, the singer was dubbed the president of the ‘stew’ nation with Tiwa Savage as First Lady and it appears he’s living up to his name as the king of enjoyment. He recently acquired a Lamboghini Urus worth $280,000 which is approximately N101m.

Wizkid is seen showing off the interior of the Italian luxury sports car in the video.