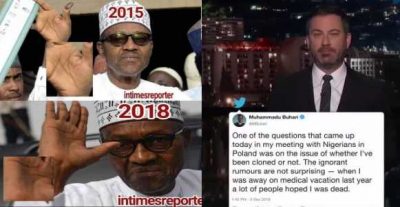 US TV show host, Jimmy Kimmel, made President Buhari the butt of his jokes during his recent recording. Jimmy on his show reacted to President Buhari who recently responded to allegations that he is cloned.

Recall that two days ago while speaking to Nigerians residing in Poland, President Buhari responded to the allegations that he was cloned and that he died while he was in london receiving treatment.

”‘A lot of people hoped that I didn’t survive during my ill health. Some even reached out to the Vice President to consider them to be his deputy because they assumed I was no longer alive. That embarrassed him a lot and of course, he visited me when I was in London convalescing… It’s real me; I assure you,’’ President Buhari said

Watch what Jimmy said about President Buhari’s response to the allegation below;