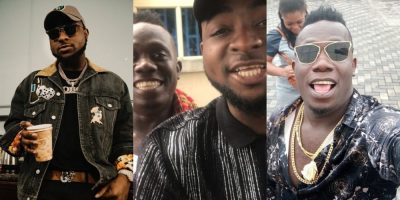 Music lovers are still yet to understand why Duncan Mighty prostrated himself for Davido, who was on a recent visit to Port Harcourt.

After Duncan Mighty shared the video of him bowing to Davido on his Instagram page, the 34-year-old was criticised for belittling himself before a 25-year-old singer, who met him in the music business.

BREAKING NEWS! HISTORY IS BEEN MADE AS DUNCAN MIGHTY COLLABORATES WITH NIGERIAN INTERNATIONALLY ACCLAIMED MUSICIAN @davidoofficial OBO & PERRUZI IN A MUSIC PROJECT THAT WILL OPEN UP THE ENTIRE NIGER DELTA REGION AND SET THE PACE FOR AN UNPRECEDENTED GROWTH OF THE ENTERTAINMENT INDUSTRY WHICH WILL BE THE BIGGEST POTENTIAL NON OIL INVESTMENT OF THE NIGER DELTA REGION. THE VIDEO WILL BE SHOT BY CLARENCE PETERS RIGHT HERE IN PORTHARCOURT TODAY..CHAI OBO U CAME VISITING ME WITH UR PRIVATE JET AND CHIOMA UR LOVER GOD BLESS U FOR THIS HONOR. Costume RIVERS ATIRE SHOOT STARTS 11am …. #mrlovalova #duncanmighty #starboy #celebrityengineer #phmosttraveled #werisebyliftingothers #phtotheworld…. #mrlovalova #duncanmighty #starboy #celebrityengineer #phmosttraveled #werisebyliftingothers #phtotheworld

In the video, Duncan Mighty appreciated Davido for doing a collaboration with him, saying the new song would open up the entire Niger Delta region and set the space for an unprecedented growth of entertainment in the region.

Explaining why Duncan Mighty prostrated himself for Davido, his manager, Michael Gabriel, said it was out of sheer happiness. He stated, “Duncan was just happy to have Davido in the Niger Delta; it was the first time he would visit for a video shoot. How many top artistes come to Port Harcourt? Everyone goes to Dubai, South Africa and other places to shoot videos. It is a big deal for someone like Davido to come to Port Harcourt and for Duncan Mighty to collaborate with him as well. He didn’t plan to bow to anyone; he was just excited. But people misinterpreted his gesture. Sometimes, there is no need to react to things like this because you will only give people more reasons to talk. When I mentioned it to him, he just focused on other things and wanted to know the next thing on the agenda.”

Gabriel said they didn’t care about the criticism Duncan Mighty had got for his recent gesture to Davido, saying it was a blessing in disguise.

He added, “Criticism drives traffic to a brand and it has helped us. We have been in the news for the past two months; so, people can continue to talk while we continue to trend. There is no week Duncan doesn’t have more than 1,000 new followers on Instagram. If you do something, people must talk. Pastor Enoch Adeboye suffers criticism despite being a man of God. Former President Goodluck Jonathan did his best, yet he was criticised.”

According to Gabriel, Duncan Mighty has become so busy that he also now struggles to see him, even as his manager. He said, “Duncan’s schedule is tight, as he is everywhere now. I receive calls from almost every part of the world from people who want to do one thing or the other with him and they are ready to pay whatever amount. I last saw Duncan three weeks ago before I did again on Thursday. After the video shoot in Port Harcourt, he followed Davido in his private jet to Lagos almost immediately.”