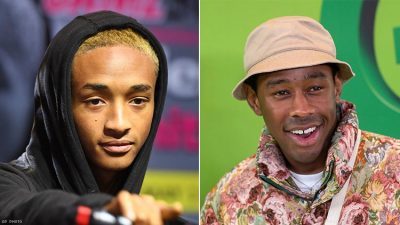 Will Smith‘s son Jaden Smith has come out as gay, and disclosed that he and rapper Tyler The Creator are dating. Tyler publicly came out as bisexual last year. The revelation came last night, at a concert in Los Angeles. The two men were both in the house, and Jaden took the microphone and disclosed his relationship.

Will’s son told the crowd, “Tyler The Creator is the best friend and I love him so much. And I wanted to tell you that Tyler the Creator is my f*cking boyfriend.”

Jaden then doubled down on his statement and even sent out a tweet right after the announcement to his gay boyfriend Tyler, and he responds:

Yup @tylerthecreator I Told Everyone You Can’t Deny It Now.

Tyler seemed embarrassed at first, by Jaden’s revelation. But then after a few seconds his expression changed. The rapper then nodded affirmatively as Jaden continued to rant on stage, and started laughing.