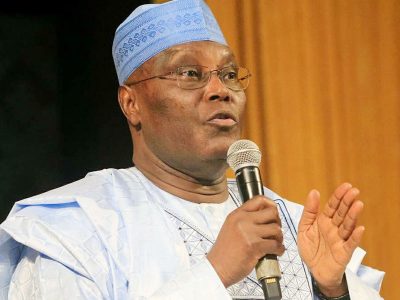 Atiku Abubakar has called on President Muhammadu Buhari to immediately declare a seven-day national mourning in honour of dozens of police officers who were killed in Zamfara State on November 29.The presidential candidate of the Peoples Democratic Party (PDP) said the national grieving should simultaneously also be observed for the fallen soldiers of the Boko Haram attack in Borno State on November 18, and the Nigerian flag should fly at half-mast during the period.

One billion dollars should also be immediately released to equip security agencies, Mr Abubakar suggested, as part of urgent measures he wants the Buhari administration to take in the wake of the losses of security personnel.

Mr Abubakar said he “regrets these deaths and is pained that those who have dedicated their lives to securing Nigeria are being cut down in their prime.”

“Coming so soon after the heavy losses sustained by the Nigerian Army at the hands of Boko Haram in Metele, Borno State, this new casualty figure is a red flag that calls for immediate and decisive action on the part of the leadership of Nigeria,” the former vice-president added.